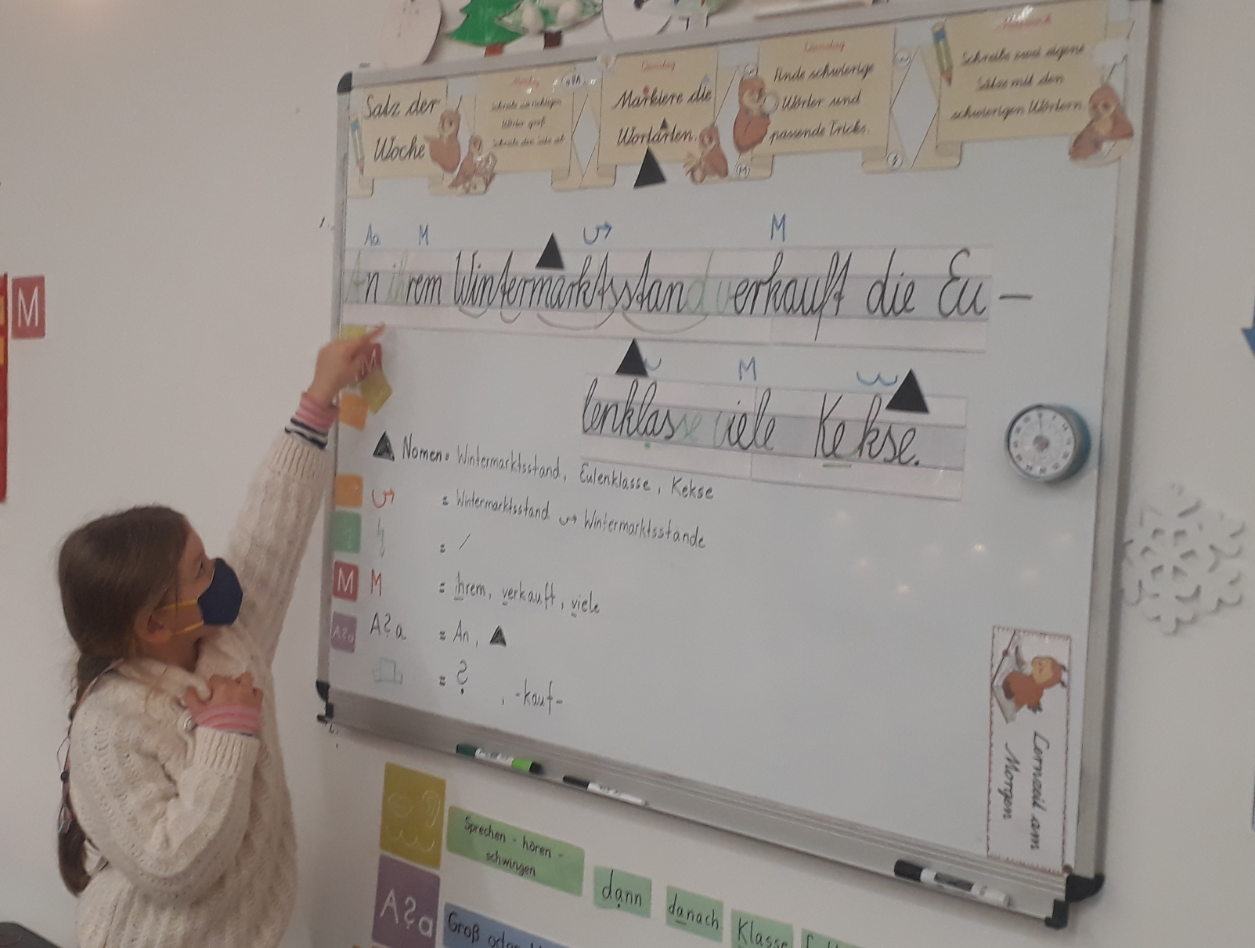 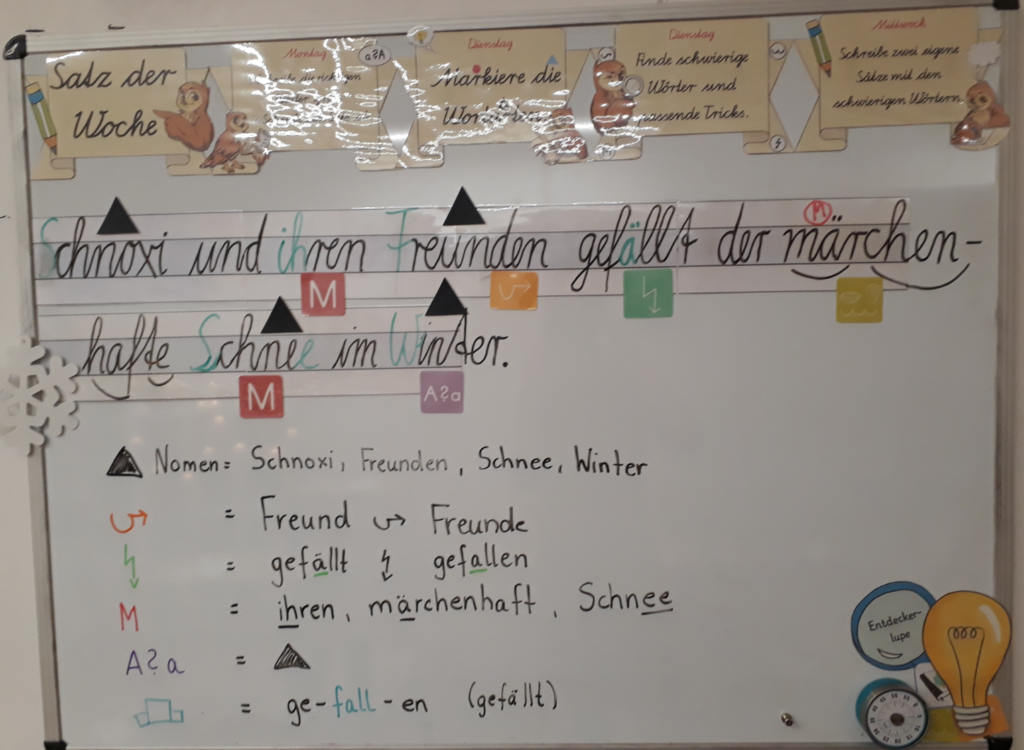 Above we have one example of what the FRESCH method looks like in practice in the second-grade. Every week we practice, discover, and deepen our knowledge of German orthographic rules with a new “Sentence of the Week.” We can see the FRESCH method here with the color-coded signs beneath specific words. These symbols recur while sentences change, helping the students to recognize regularities in German grammar.

While looking at the whiteboard above in the Owl classroom, you might also hear the sentence “gefällt is written with an ä and not with an e because it comes from the word gefallen!” (“gefällt schreibe ich mit a und nicht mit e, weil es von gefallen kommt!”).

The strategy above is called “Ableiten.” It means deriving the spelling of a word from another related word that explains why the vowel a becomes the umlaut ä.

This is but one out of six strategies that comprise FRESCH – a method that focuses on the regularities of the German language and that helps students to understand and logically deduce the spelling of a word. The FRESCH method is a fixed component of our German curriculum at German School Manhattan and it is a vital part of our German language lessons from Kindergarten onwards. The different strategies are taught alongside the regular German core curriculum and they enrich the grammatical components of the lessons.

Beginning in the first grade, we work with a Sentence of the Week. In the example above, the first graders have already found the difficult parts of the words and explained them with the help of the FRESCH strategies. Each strategy is represented by a memorable symbol — this excludes the black triangles, which depict Montessori word classes.

The FRESCH method (Freiburger Rechtschreibschule) was developed by Günter J. Renk and Heike Buschmann as an approach to language that focuses on perception, movement, and rhythm. It was first developed for students with difficulties in reading and writing, but it soon became part of the regular curriculum in many elementary schools across Germany. School book publishers have adopted the method into their textbooks and extended it. At GSM, we can find this in our Zebra (Klett) textbook. Usage of this method has been validated in the elementary and secondary school levels.

The method comprises six strategies which are used to organize the school relevant vocabulary (we use the German core vocabulary for elementary schools as the basis) according to certain aspects words share in regard to spelling. These strategies can be understood as a tool kit that we offer our students to be prepared for independently deducing the spelling of words now, on an elementary level, and later on in secondary school since the strategies apply to the entire German language.

The syllable serves as the basis of orthographic writing and learning. It is understood both as the natural rhythm of a word and as a unit of segmentation to break down a word into shorter parts. Syllables are connected with movements so that the memorization and development of the natural rhythm is supported visually and aurally. This is called “rhythmisch synchrones Spreschwingen” and it is the first of the six strategies. 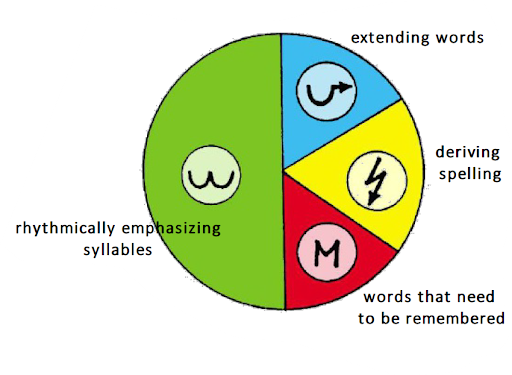 In the German lexicon, approximately 50% are spelled as they are pronounced. The rhythmic swing of syllables allows words to be broken down into shorter, simpler parts. When rhythmically emphasizing syllables, the individual sounds are exaggerated and every phoneme is to be identified. This strategy helps students write longer words independently. It is also connected with the rule that every syllable needs a vowel. This enables students to check their spelling independently after a little practice.

This basic strategy is taught and used in Kindergarten as it establishes the foundation for more advanced strategies. In Kindergarten, the students approach this strategy playfully by moving to syllables and discovering vowels as the core of syllables. In first grade, students continue using this strategy for more complex words. The focus is the identification of long and short vowels. The latter is crucial for second grade as orthographic rules are connected with long and short vowels in their regularities. This relates to double consonants, for example, or the use of the “sz” /ß/.

If a word cannot be spelled correctly with this method, i.e. if the word is not written as it is pronounced, then the other strategies come into play.

For example, this strategy [Verlängern] is used when the end sound of the words cannot be clearly identified. These end sounds comprise the following sound pairs: b or p, d or t and g or k. The word is extended by one syllable to make the end sound audible.

This strategy is introduced in first grade and connected with German specific digraphs, as for example /ng/ vs. /nk/. This work continues in the following grades and is used as a means to explain and check the spelling of words. 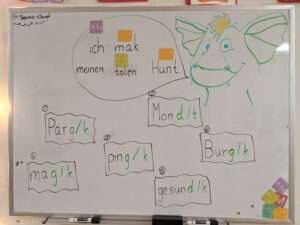 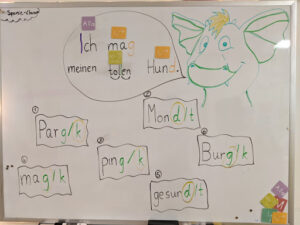 Our first-graders, the Dragons, have just learned about the strategy “Verlängern”. With the help of the symbols, they correct strategy-based mistakes in the Sentence of the Week.

This is the strategy used in the example above. It is used when the spelling of a word with the similar sounding sounds of /e/ vs. /ä/ and /eu/ vs. /äu/ can only be derived from a related word with an /a/ or /au/ as the root vowel.

This strategy is introduced in first grade. It is used more frequently and with increasing complexity from second grade onwards.

Words that need to be remembered (Merkwörter)

All words whose spelling cannot be deduced from one of the strategies explained above are called Merkwörter. These words need to be remembered by heart.

In first grade, we focus on the most common of these words, in accordance with the German core vocabulary, e.g. und or sind.

In second grade, we focus on specific word families, e.g. all words beginning with V, words with ä without a related word, and more diverse words from the German core vocabulary.

In the bilingual context at GSM, we link German “Merkwörter” with English sight words. We use similar games and strategies to practice to offer the students different strength- and approach-based ways to remember the spelling of words.

Instead of a strategy, this symbol can better be understood as the summary of the regularities of upper- and lower-case letters in the German language (beginning of a sentence, nouns, names). We introduce these rules already in Kindergarten on a very basic level, although the symbol is only used from first grade onwards. We also use it as a means to compare regularities between our two languages.

Similar to the strategy above, “Wortbausteine” comprise a set of syllables. This symbol stands for common prefixes, suffixes, and word stems of the German language. The idea is that these components can be taken and put together to create a new word. An example is the word stem “-lieb-”. The part that needs to be recognized is the long vowel /ie/. If this syllable is remembered as a word stem, then it allows me to spell every word correctly that is part of its word family: Liebe, lieben, lieblich, verliebt, etc.

The most important word stems are introduced in first grade and are constantly reviewed in second grade.

When students are used to working with these strategies, it allows them to correct their own texts independently — the spelling of words no longer seems elusive, but can be explained with at least one of these strategies. In our German-English bi-lingual context, students suddenly start to compare discoveries they made in one of these languages with the regularities of the other. For students who learn German as a foreign language, the complexities of the German language become more accessible and more easily. understandable.